With the launch of Riv’s fourth venue, we decided it was high time to build up our Set Design Team to include more than just the usual three guys. We put out an ask for volunteers to join the team and the response was great!

With this series being our big fall launch, we wanted to really up our game in the scale of this set. The series is titled Credo and looks at Riv’s mission statement, vision statement, and core beliefs. A number of our recent sets have been very metallic in structure and organic in form, so we decided to push this in the opposite direction – wooden and geometric. This provided the opportunity to go with a very architectural motif which ties to the fact that this series’ content is foundational to the Christian faith.

The decision to go with triangles versus squares was for a few reasons. First is the shape being a reference to the triune nature of God, as He forms the basis for all our beliefs. Secondly the triangle is the strongest of shapes, and the statements expressed in our mission are what we really stand upon as a church. The Gospel is both simple and incredibly complex. A triangle is a simple shape, yet we’ve layered it and replicated it in a complex structure. From any angle that you look at the stage you’ll see different nuances of the set.

Below you’ll see photos of the full process of planning, building, and assembling this set across our venues. 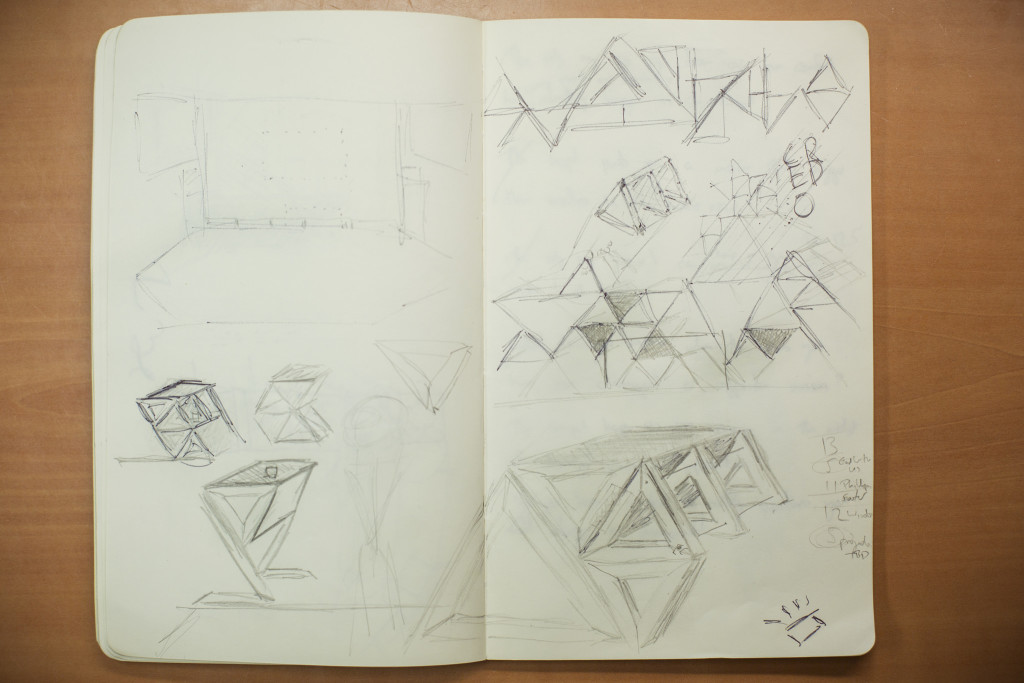 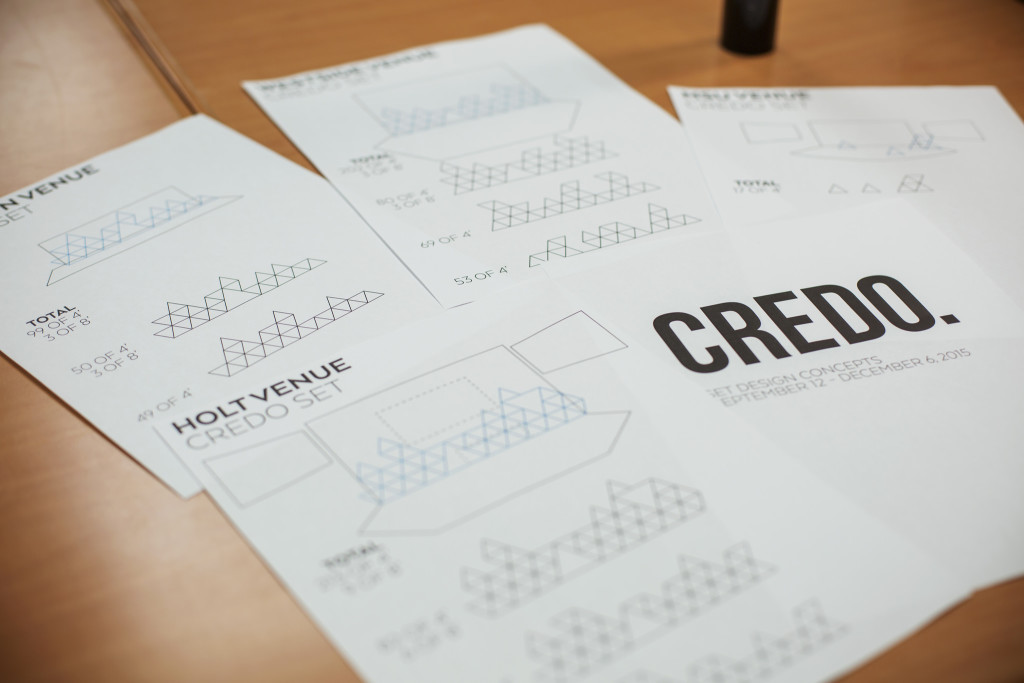 Roughly 350 2x4s were used for this set. And 3000 individual cuts were made. Each 2×4 was cut in half and then cut into a point at 60º angles to meet together in a perfect hexagon. 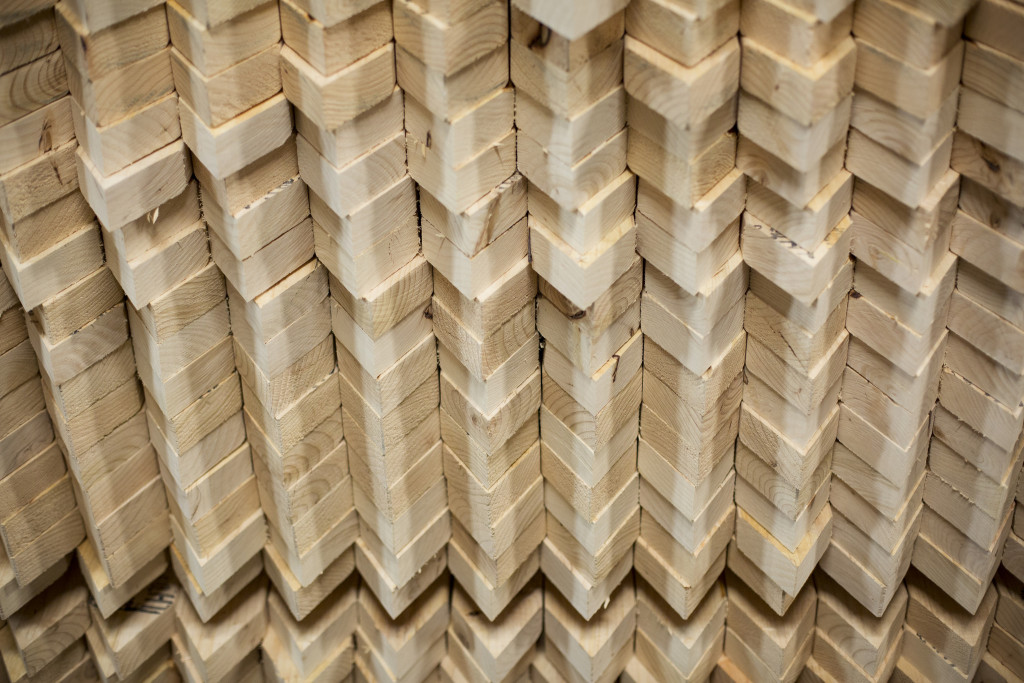 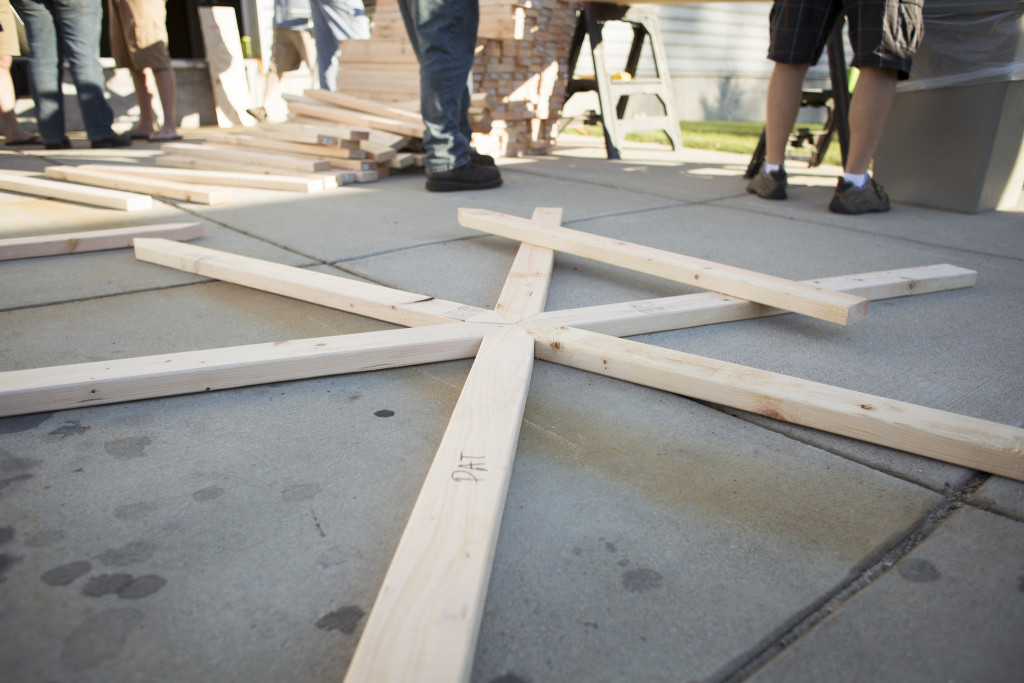 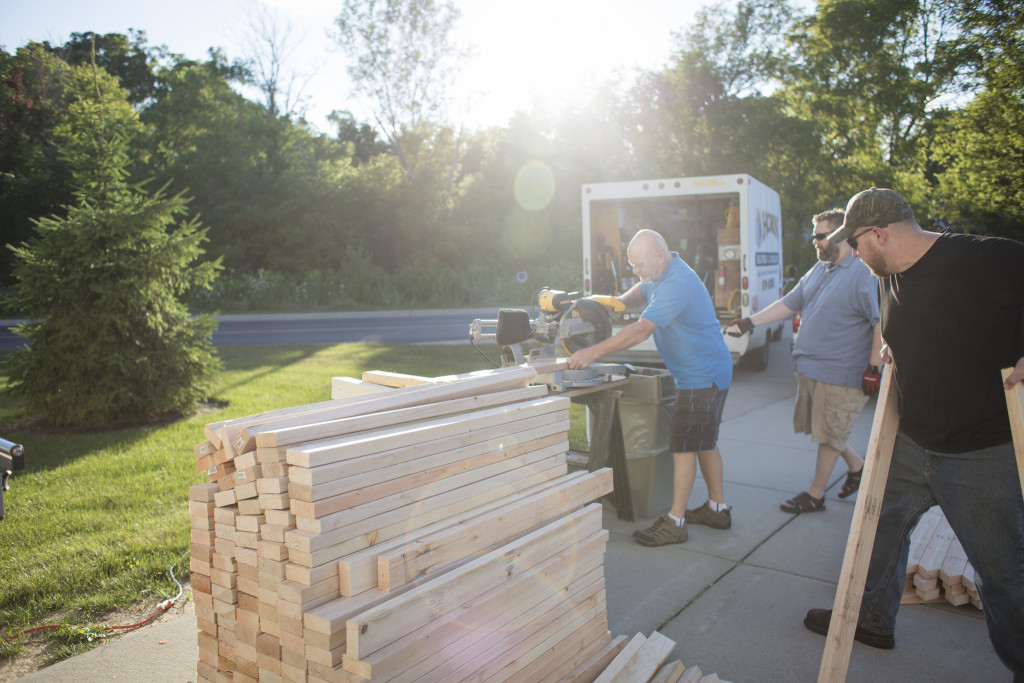 Ten people contributed to the building of this set totaling 160 hours of work. 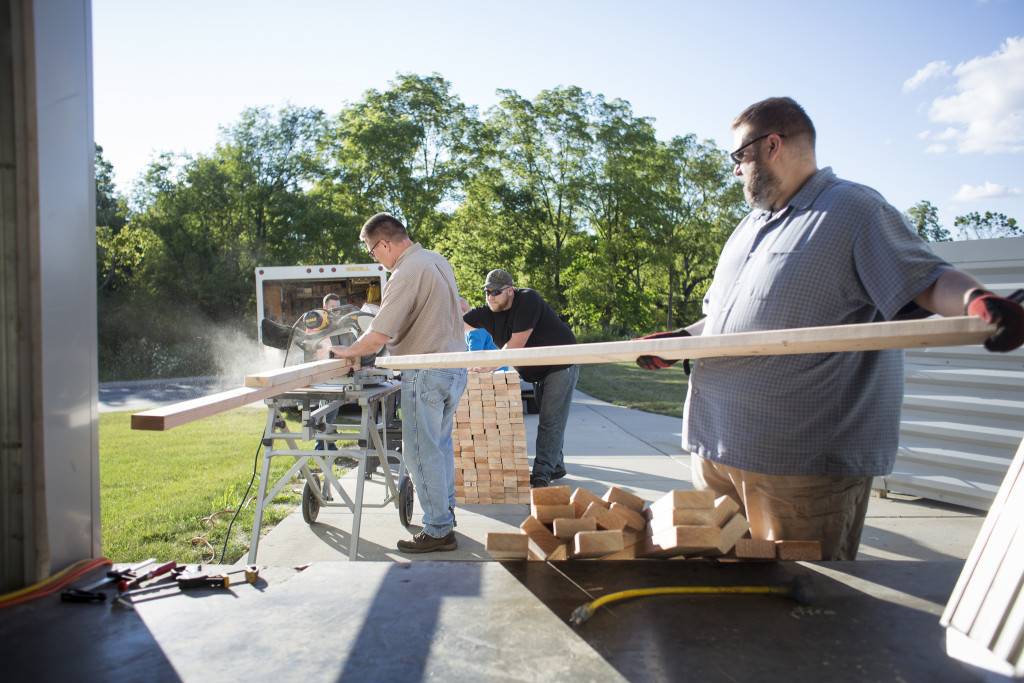 For the assembly of all four sets we used 1000 staples and 3/4 gallon of wood glue. 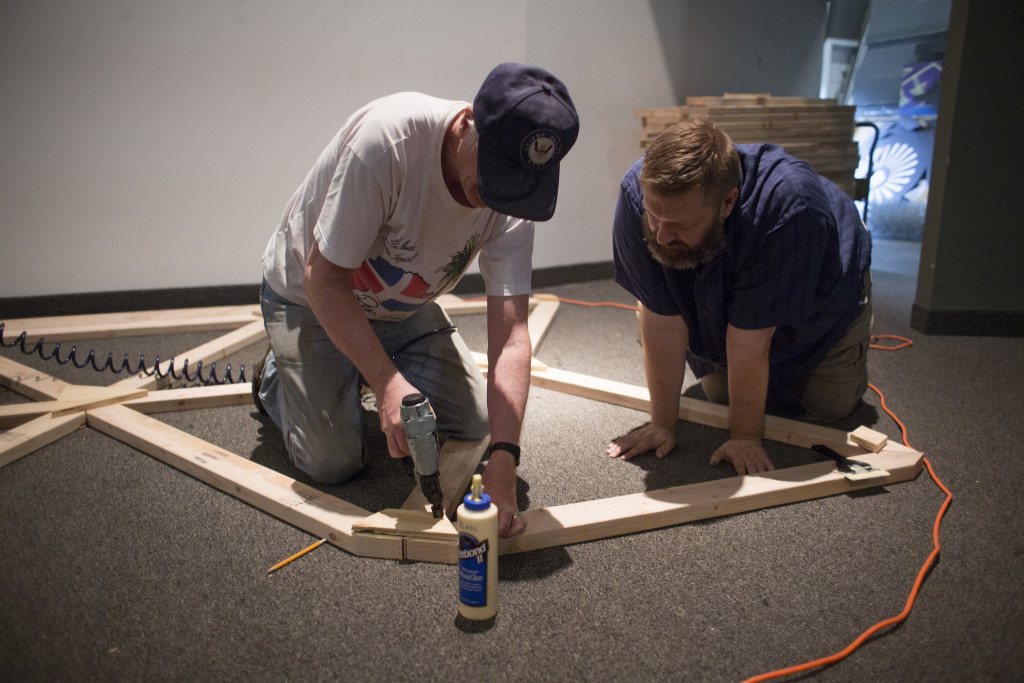 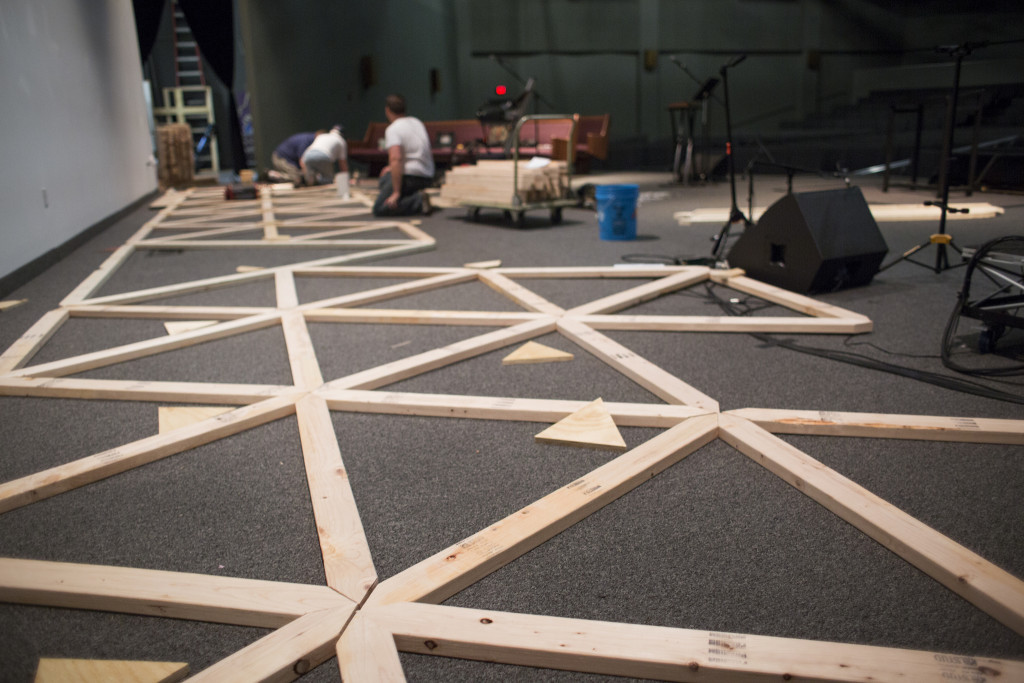 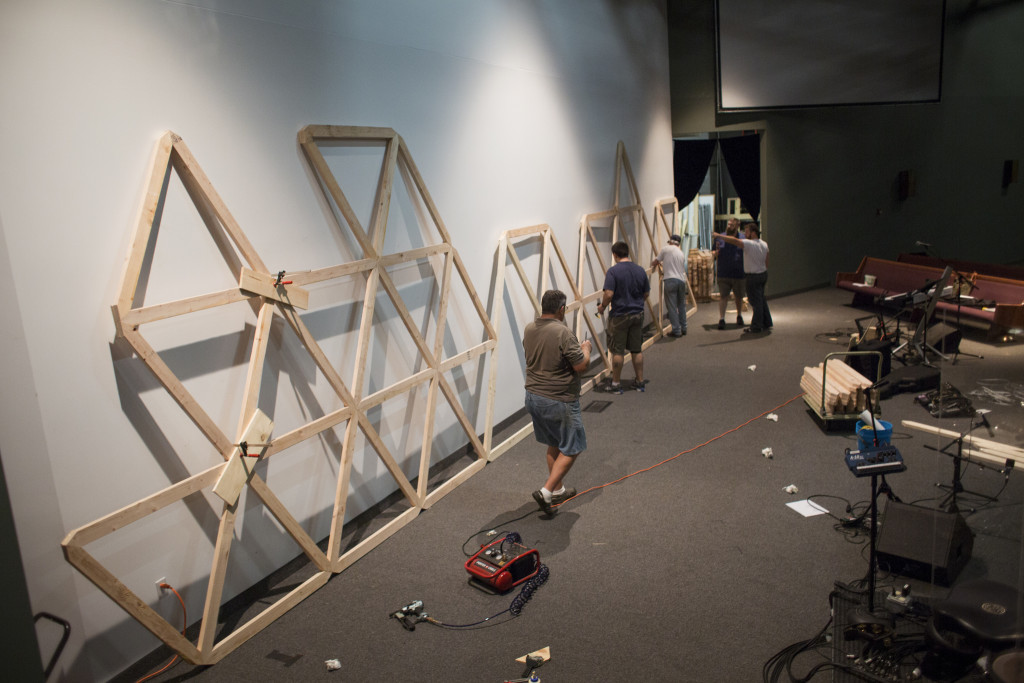 The table was custom built for this series to be on stage at the Holt Venue. It matches the 60º cuts that are used across the entire set,  just on a smaller scale. To prevent the table from tipping, the whole piece is mounted to a 40 pound baseplate (can’t have Noel’s coffee spilling during the service). 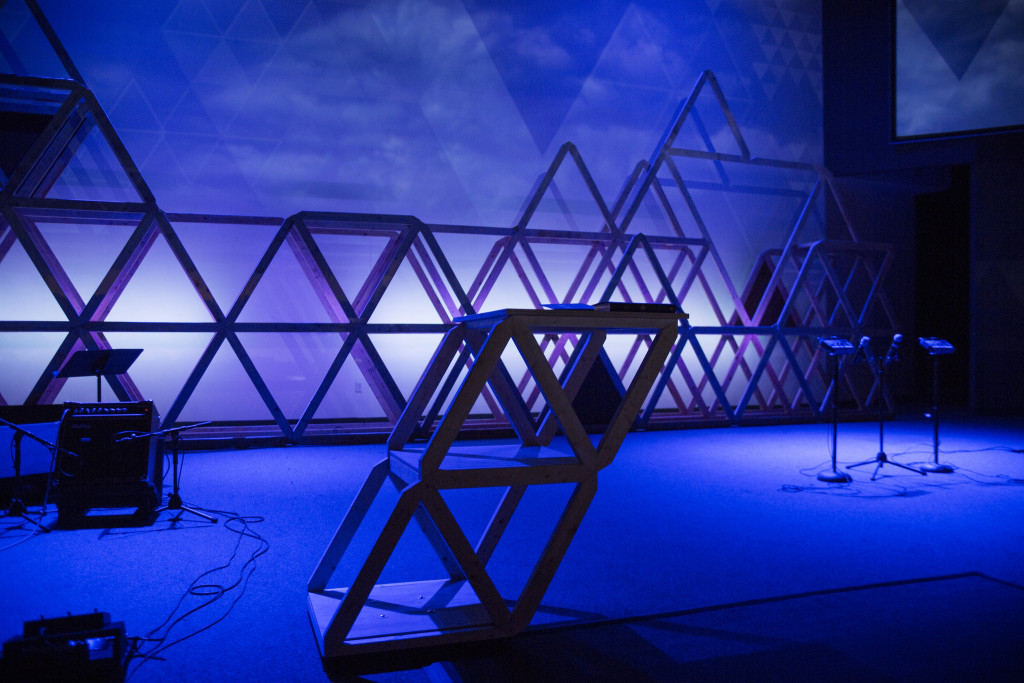 Each set has LED strip lights mounted to the backside of the first and third layers of the structure. This allows us to illuminate both the internal structure and the back wall to correspond with the stage lights that change throughout the service. 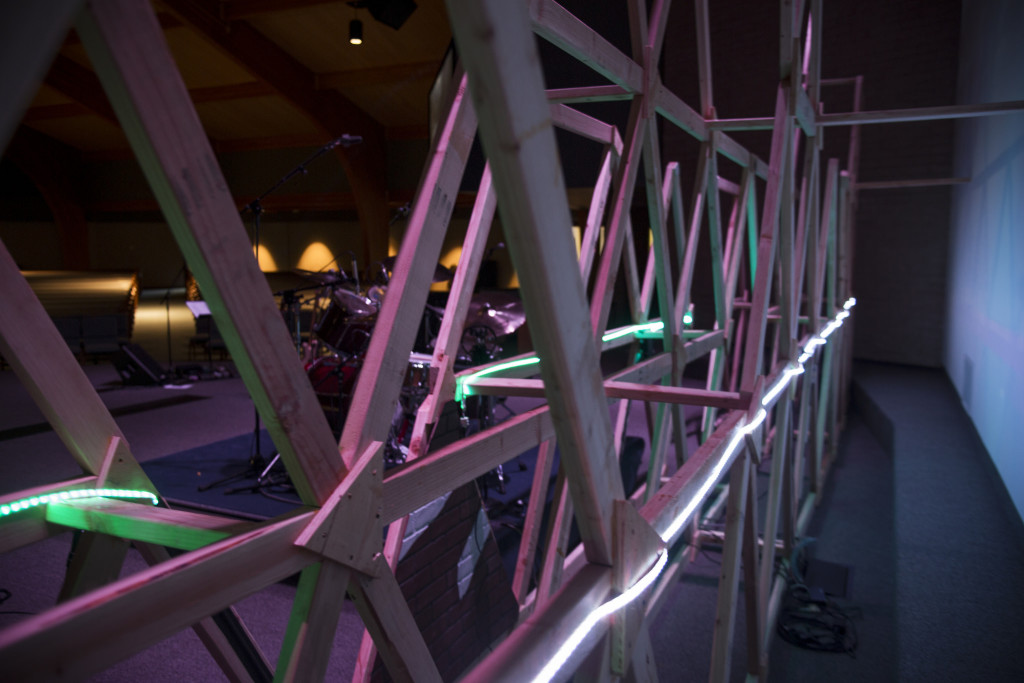 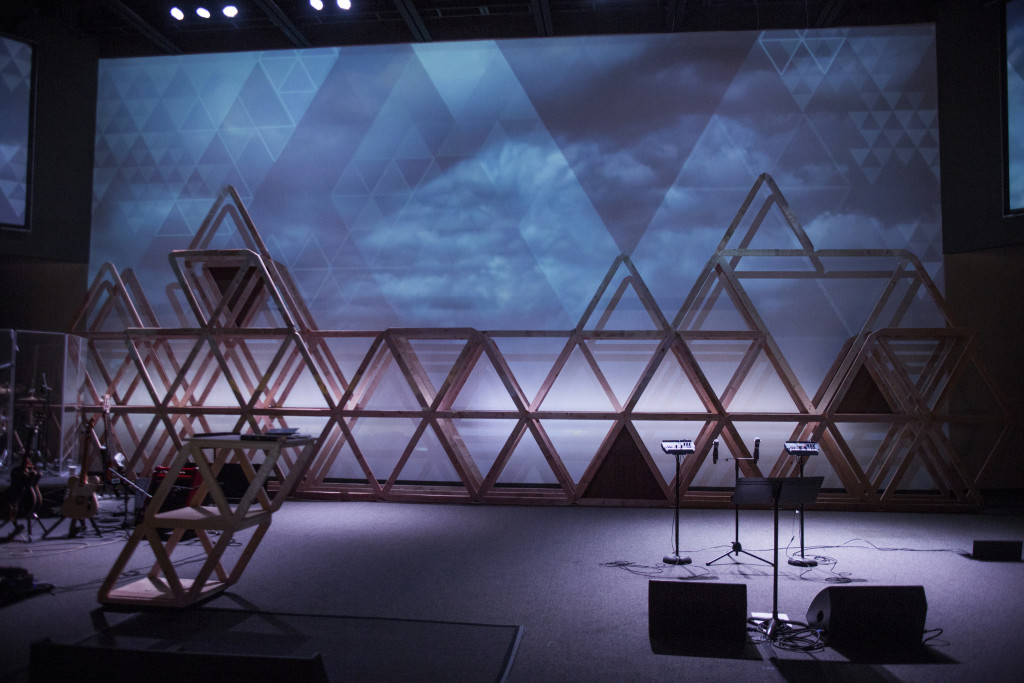 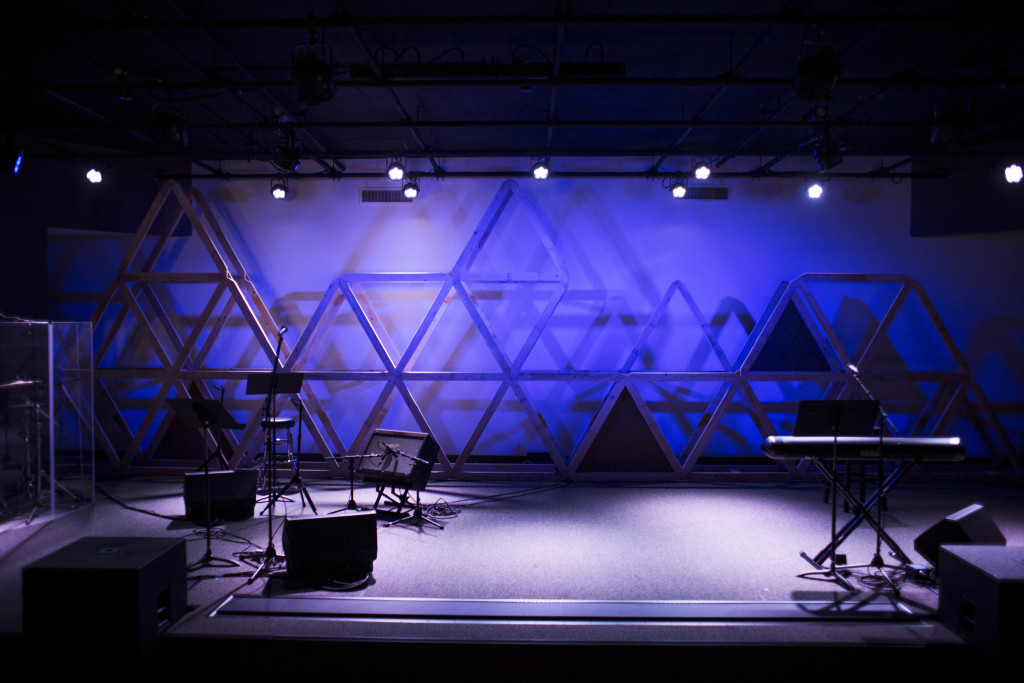 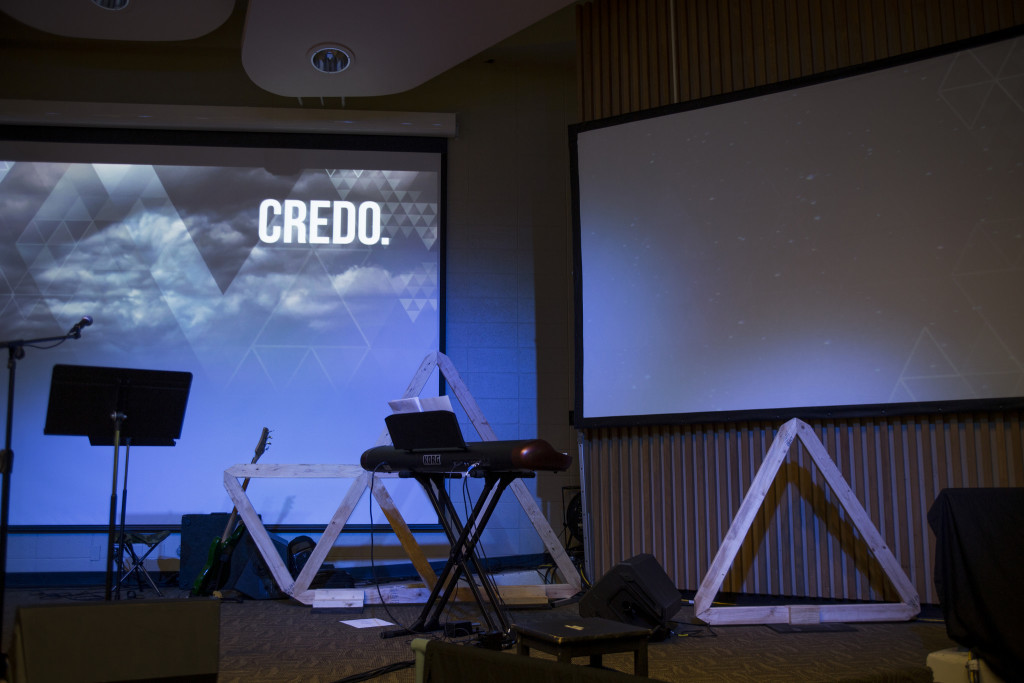 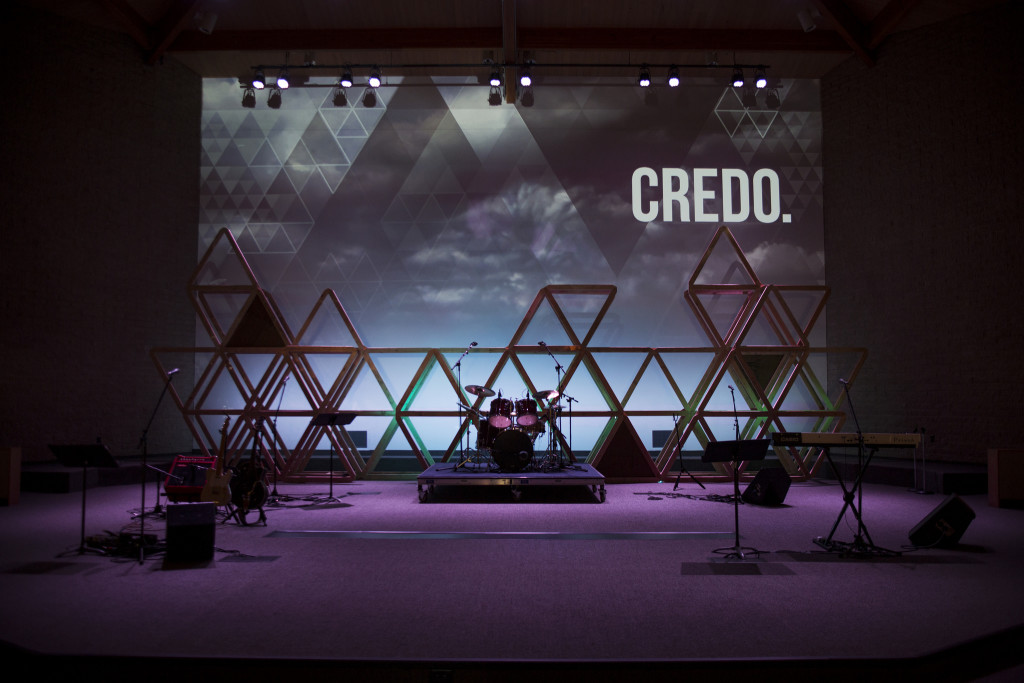 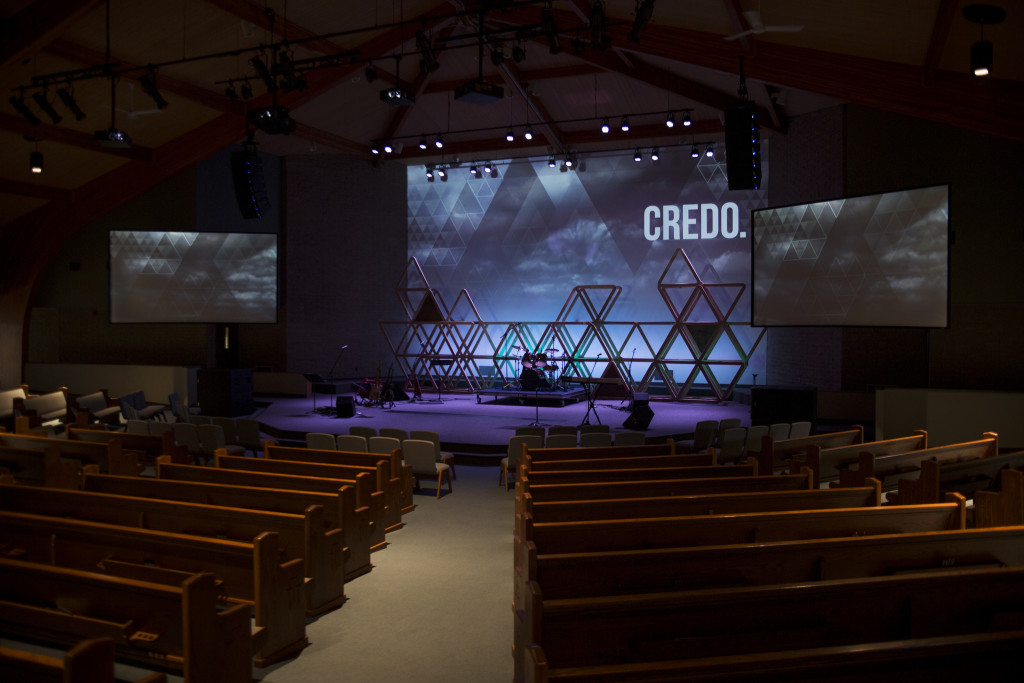 One piece of set design that provides an added challenge is building each set so that it matches nicely with the image that is projected on the screen at our video venues. Below is the Westside Venue’s screen raised during the message. 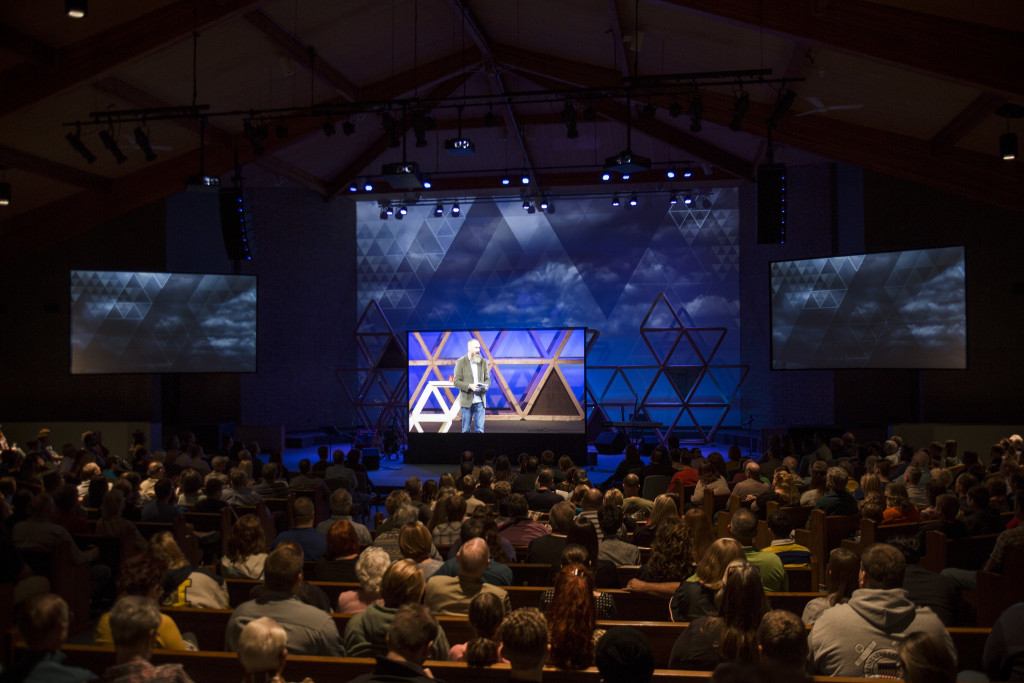